But first, a word from our sponsor…

Now then, the news! Just dug out today from the SLC newspaper:

A land exchange deal which would allow for a land trade between school lands and the Bureau of Land Management is close to finalization after nearly ten years of negotiations. 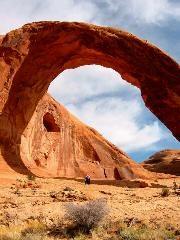 Under the exchange nearly 60 million acres of land, appraised at equal value, will be traded between the Utah School Institutional Trust Lands Administration and the BLM.

The BLM’s Megan Crandall said through the trade SITLA would receive 35,000 acres of land from the BLM in exchange for more than 25,000 acres in Uintah, Grand and San Juan counties.

“Through the exchange the Bureau of Land Management is going to get some wonderful lands with increased recreational opportunities, which is great," said Crandall. "But the state is also going to get some lands that have very high potential for energy development."

The land exchange was approved earlier this year and is now open to public inspection. SITLA Director John Andrews said after the comment period ends, concerns will be investigated before the deal moves to the legislature.

"Once the protest period is over, there are a couple of additional notices that the BLM has to file with the relevant congressional committees and then the only thing left to do is to exchange the title documents and record the deeds," said Andrews.

Andrews expects the exchange to be finalized in early May.